ICYMI: We see how the Samsung Galaxy Z Fold 3 performs in the real world

by Amber Bouman
in Technology News

We checked out a couple of ambitious Samsung products this week, plus a few other gadgets. Cherlynn Low tested the Galaxy Z Fold 3 smartphone, which is the third generation of Samsung’s foldable hybrid, and the Galaxy Watch 4, which is one of the first devices to run on the new Wear OS platform. James Trew popped off keys and customized the Keychron Q1 keyboard, while Daniel Cooper was pleased with his time with HP’s light yet capable Pavilion Aero 13 laptop. 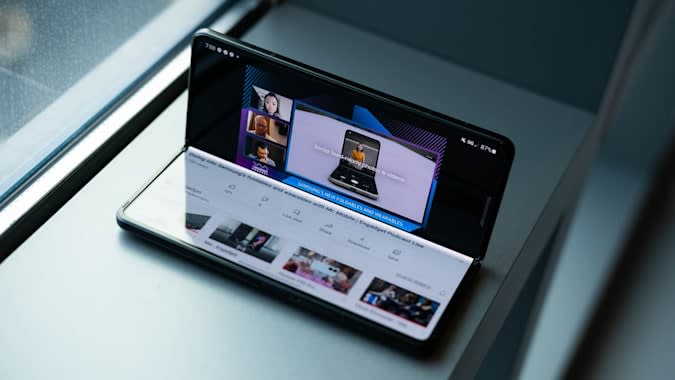 Although Cherlynn Low likes a lot of the improvements made to the Galaxy Z Fold 3 and calls it an impressive piece of tech, she still isn’t sure it can replace a regular smartphone for most people. The third generation of the folding device has a stronger, redesigned screen, a streamlined hinge and a robust aluminum build, and Samsung says it’s 80 percent more durable than previous models. According to Cherlynn, it easily withstood being thrown in a purse full of sharp and heavy objects, and the IPX8 water-resistance kept it safe from water droplets.

The Fold 3’s external 6.2-inch, 2,268 x 832 display refreshes at 120Hz and uses a Dynamic AMOLED panel, which made for fast scrolling and vibrant images. The phone also has S Pen support, although the stylus costs extra and there isn’t a slot for it on the device. There’s also more software support to improve the full-screen experience, like Multi Window and Flex Mode panels, plus five onboard cameras, which generally produced bright and colorful shots. Despite these wins, she felt that the device was over-reaching and attempting to do too much to achieve mainstream adoption.

The Galaxy Watch 4 shows off the new Wear OS platform 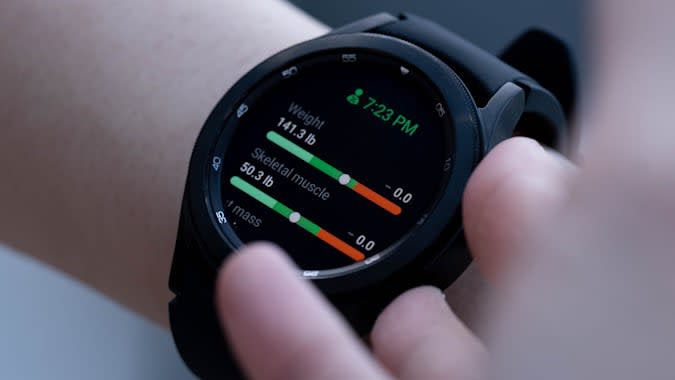 Cherlynn Low is candid about how the Galaxy Watch 4 makes her feel, calling it and the rest of Samsung’s smartwatches the best Android wearable options around. The combination of capable hardware with intuitive software features and comprehensive health tracking continue to provide a satisfying experience. The Galaxy Watch 4 adds some interesting marquee features with body composition scans and snore detection, but Cherlynn says she’ll need more time to determine how useful these features are as they are, for now, somewhat unreliable.

The Galaxy Watch 4 includes a sharp 1.4-inch screen with a 450 x 450 resolution, a touch sensitive rotating bezel, and an updated 5nm processor with more storage. It also supports gesture controls that allow you to respond to calls or messages, but Cherlynn says they don’t work very well yet. She was also disappointed with the watch’s battery life, which barely made it through a day. She was more impressed with how accurately and quickly it registered her walking, and she liked that the watch tracks 95 different workouts. She also was pleased that the Wear OS platform strongly echoed the intuitive UI strengths of Tizen, save for the new ability to download apps directly from the Play Store. Despite some hiccups, she’d still recommend the Galaxy Watch 4 or Watch 4 Classic to Android users. 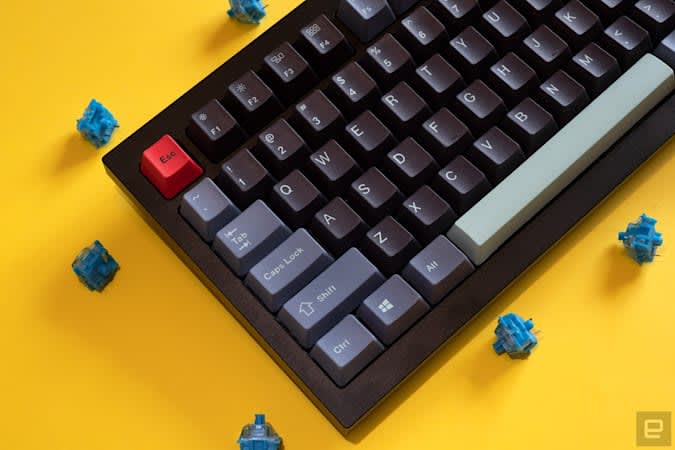 Keychron is known for making economical keyboards and James Trew says its newest offering, the Q1, is affordable, easy to customize and full-featured. The Q1 has hot-swappable switches and an Aviator style USB-C, which should appeal to both avid tinkerers and those who are interested in getting deeper into the geeky details of mechanical keyboards. It comes with a keycap puller and a switch remover, plus keycaps for Windows and MacOS layouts, but it lacks Bluetooth so you’ll have to live with it as a wired peripheral.

The Q1 features the expected RGB key lighting, but has a south-facing integration for a more subtle effect. Inside are a noise-reducing foam deck and screw-in stabilizers for steadier keys. James particularly liked the option to etch a customized metal badge where the Insert key goes. He reported that swapping out keys was easy, and that using the companion Via app was a convenient way to customize the Q1. However, he points out that, at 3.5 pounds, the Q1 isn’t designed for portability and that its height cannot be adjusted. 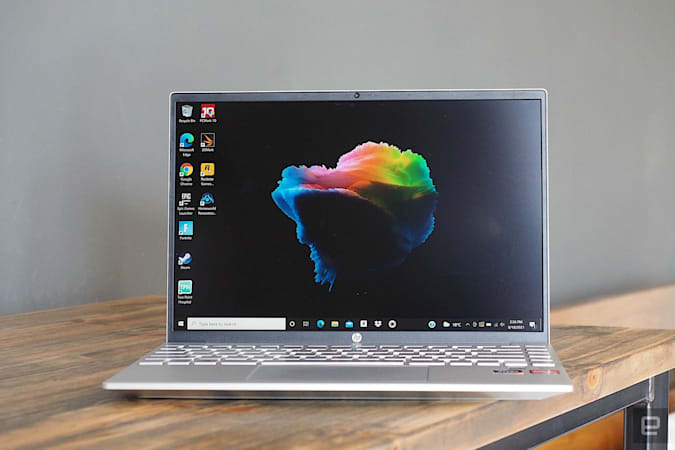 Daniel Cooper found plenty of reasons to recommend HP’s new Pavilion Aero. The lightest laptop yet from the company weighs in at a mere 2.2 pounds and still manages to fit in a 13.3-inch, 16:10 display with 1,920 x 1,200 resolution. Rounding out the specs list on our review unit was AMD’s Ryzen 5800U with Radeon Integrated Graphics, 16GB of RAM and a 512GB SSD. Daniel said the build quality is solid, save for the malleable display hinge; the keyboard is well-engineered and satisfying; and the trackpad has tolerable accuracy. He also approved of the battery, which lasted for 9 hours and 43 minutes during testing.

He was less thrilled that the keyboard wasn’t backlit by default, but you can pay $20 extra to get that. And while he was pleased by the performance of the WideVision 720p webcam, he said the downward-firing B&O speakers pumped out audio you could put up with but not fully enjoy. The preinstalled software was another annoyance — getting pop-ups for plugins is never appreciated. Being a relatively affordable laptop, Aero isn’t set up for intensive gaming but Daniel was able to play Fortnite pretty smoothly with medium graphics power. Overall, he says the Aero is clearly punching above its weight and could almost be recommended as an alternative to the Dell XPS 13 for those with tighter budgets. 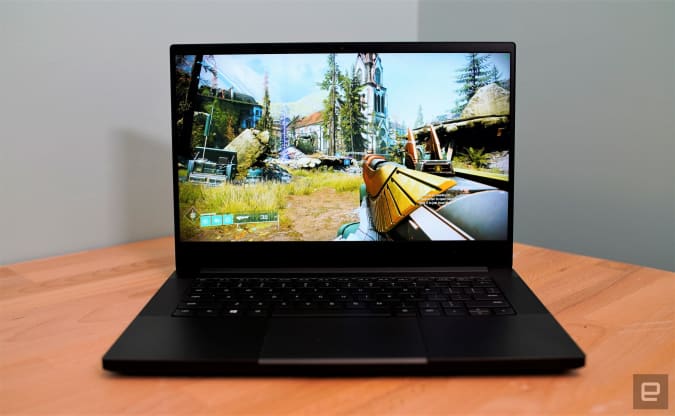 Razer’s new 14-inch Blade laptop hits all the right notes for Devindra Hardawar: It’s plenty powerful thanks to an NVIDIA RTX 30-series GPU and AMD’s latest processor, and at just under four pounds, it’s still light enough to carry comfortably. Featuring a minimalistic design and a sleek black aluminum case, Devindra’s review unit came equipped with an RGB LED keyboard, 16GB of RAM, a 1TB SSD and a quad-HD 165Hz display. He reports that the laptop easily handled demanding games even in maxed-out settings and that the ray tracing performance was solid.

Devindra also liked the responsiveness of the keyboard, but said the layout felt a bit cramped for longer gaming sessions. During battery testing, the Blade 14 made it 10 hours and 50 minutes (running productivity tasks, not games). But during heavy gaming sessions, Devindra reports that the CPU reached up to 94 degrees Celsius, which is unusually high. Another downside? The RAM isn’t upgradeable like it is in the larger Blade 15 and 17 laptops. He says if those compromises aren’t deal breakers, then this is worth recommending given its $1,800 starting price.

The iOS 15 Privacy Settings You Should Change Right Now

Dear Reader, We added 2 stocks to our Industrial Goods Stock Watchlist today because they are receiving Bullish Sentiment from...

Dear Reader, We added 4 stocks to our Technology Stock Watchlist today because they are receiving Bullish Sentiment from investors...

John Gerdes, analyst at MKM Partners, reiterates coverage on California Resources Corp (CRC) in the Utilities sector with a Buy...

Ariel Rosa, analyst at Bank of America Securities, reiterates coverage on XPO Logistics (XPO) in the Industrial Goods sector with...