by Stephania Culton
in Technology News

Dyson’s newest vacuum isn’t one for subtlety. It has a laser strapped to the front of it for the purpose of highlighting where the dust is hiding. The Dyson V15 Detect is the company’s newest, top-of-the-line cordless vacuum in its line of stick vacuums. It’s more powerful than my own Xiaomi stick vac (and the Dyson V6 I owned several years ago), while swapping out the cleaning heads makes it suitable for both carpets and hard floors (or a mix of both, like my own). However, that versatility and sheer cleaning power (ugh, did I just write those words together?) will cost you $699. Are those high-tech additions gimmicks or truly helpful upgrades for a cleaner home?

I’ve spent a couple of weeks with the V15, and my rugs, carpet and hardwood floors are cleaner than they have ever been — barring a mop. It makes a compelling case for high-end stick vacuums. 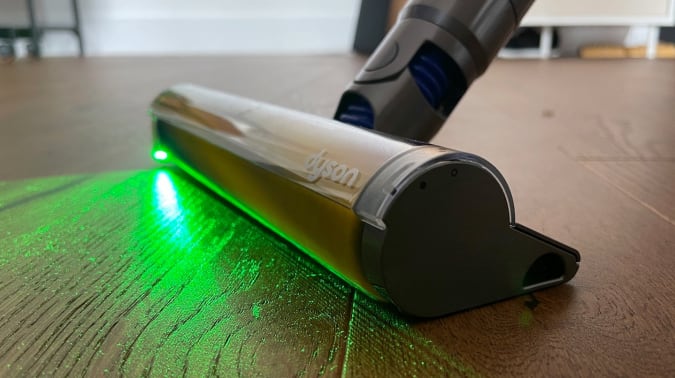 The marquee new features — an acoustic piezo sensor and laser head — are aimed at reassuring you that that your house is indeed cleaner.

While there are several notable features on the V15 Detect, let’s start with the showiest one, the laser ‘blade’ light on the cleaning head. It’s there to visibly show you that your Dyson vacuum is cleaning your floors. Due to the angle the laser is aimed at, it “cuts” across the floor at a 7.2mm level. This is the perfect height, apparently, for highlighting your dust bunnies.

Any illusions I had of keeping a remotely clean home were dashed. I knew my rug sheds fine fibers pretty easily. I didn’t know how easily they evaded my old stick vacuums. For the sake of testing the V15, I vacuumed my floors with my Xiaomi vacuum, then I went back over the same areas with the V15. Besides my carpeted bedroom, it’s a one-room hardwood floor situation, making it ideal for Dyson’s laser feature.

The laser works as promised, illuminating hairs, dust and other detritus, making it hard to miss, or ignore. It made me scrutinize my vacuuming, literally highlighting where I hadn’t vacuumed before, or what my other stick vac didn’t — or couldn’t — pick up. The laser, positioned at a precise 1.5-degree angle, won’t help with carpets or rugs, which is why it’s only found on the company’s Fluffy head.

The next major feature is an evolution of the see-through dust canisters that became de rigueur in nearly all stick vacuums, and several plug-in upright models. (Dyson had a hand in that trend.) Seeing what you’ve managed to pull from your floors is surprisingly satisfying. 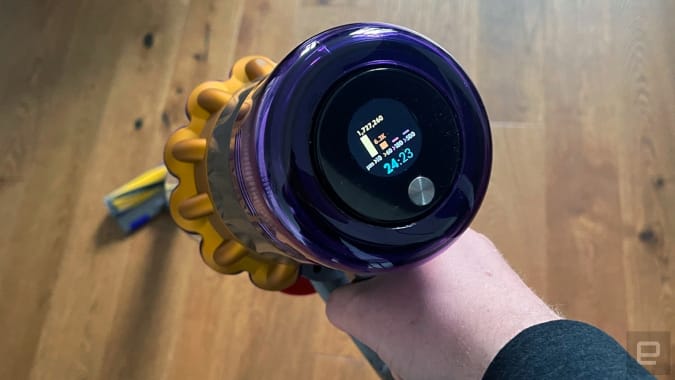 Dyson took this further. A new piezo acoustic sensor detects both size and frequency of the dust and other particles you’re collecting. The sensor turns the tiny vibrations of dust particles hitting a surface inside the cleaning head into electrical signals. Carbon fibers then roughly measure these microscopic particles, which are, Dyson says, counted at up to 15,000 times a second. From this, the V15 can display a particle count of your clean on an LCD display on the back of the vacuum, laying out whether you’re sucking up lots of larger particles or finer dust.

Let’s be honest: the size of particles doesn’t really help improve my cleaning — nor does knowing that I’ll pull in millions of particles every time I swing the V15 through my home. You can reset this count when it recharges or by slipping the battery pack out. I guess you could attempt to either hit a new high score each time you clean, or try to generally reduce your scores for some kind of proof of cleaner floors. I’m not quite sold.

The acoustic piezo sensor also adjusts the V15’s cyclone engine to better clean your floors. Last year’s V11 adjusted its suction when it detected carpet or rug fibers, but the V15 is even smarter. On Auto mode , these particle counts will change how much power the V15 puts into cleaning. If it detects higher levels of tiny detritus, it increases the suction itself.

Beneath the LCD display that shows those particle counts, there’s a button that switches the V15 between three different suction modes. We’ve already mentioned Auto, which was my de facto setting most of the time. Eco should extend the battery life for up to an hour, according to Dyson’s estimates. At the other end of the scale, there’s Boost mode, which puts Dyson’s cyclone engine on full power. Handily, as you switch between modes the vacuum offers battery life estimates in minutes that dynamically changes depending on which mode’s being used .At maximum power, that time will understandably plummet. But with a full battery, it seemed to hover around the 20-minute mark for Boost cleaning. Auto mode promised roughly 45 minutes of use with a fully charged battery. 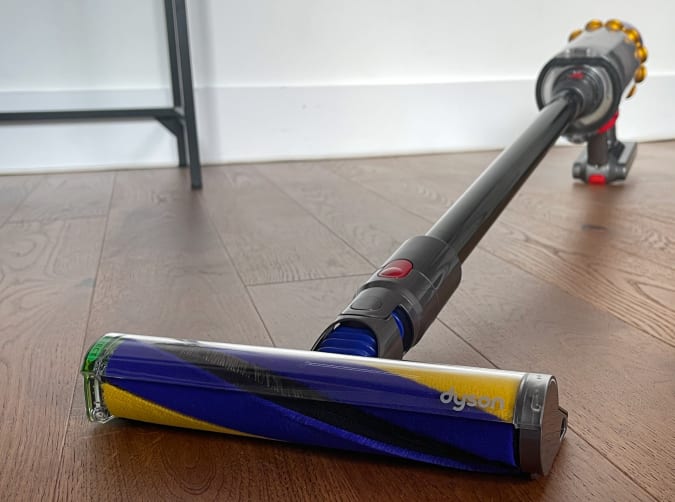 The “detect” innovations aside, this a very powerful vacuum, on par with other plugin vacuum cleaners many times bigger and heavier. It is definitely the most powerful vacuum I’ve ever used. Consumer Reports and Wirecutter have made similar remarks about the V15 — and they review far more vacuums than I.

We don’t test nearly every vacuum that Dyson makes, so I can’t offer a comparison to last year’s model, even if it looks awfully similar to the V11 — and costs the same. The 6.8-pound V15 is noticeably heavier than the 4.6-pound V6 that I’m used to. I wouldn’t call it unwieldy, but besides the need to constantly pull the trigger to activate, it can get a little more tiring. With all this power, though, I felt I rarely had to run over the same area twice.

Dyson has added a single button start to some of its newest vacuums, but that didn’t include the V15 Detect, sadly. You’ll still have to hold down the trigger — and keep it held down — until you’re done cleaning, adding to the effort needed.

The V15 is a total beast at extracting ingrained dust and dirt in carpets and rugs — areas where the laser doesn’t even work, due to the uneven surface. Using the high torque cleaner head, what looked like a perfectly clean rug was hiding a half canister of rug and fiber. Ew — thanks, Dyson. This cleaning head also has a new anti-tangle comb built-in for households with pets, or people with longer hair than my crew cut. I wasn’t able to test out whether it cut through clumped-together hair, but the V15 also comes with yet another accessory dedicated the challenge, a hair screw tool. It looks hypnotic in action.

There are also two crevice peripherals: a stubborn dirt brush and a soft dusting brush. The two primary heads are designed for different tasks, and while a lazy part of me wishes the company would come up with a head that fuses the benefits of both (maybe it will?), for now two specialized heads will suffice. 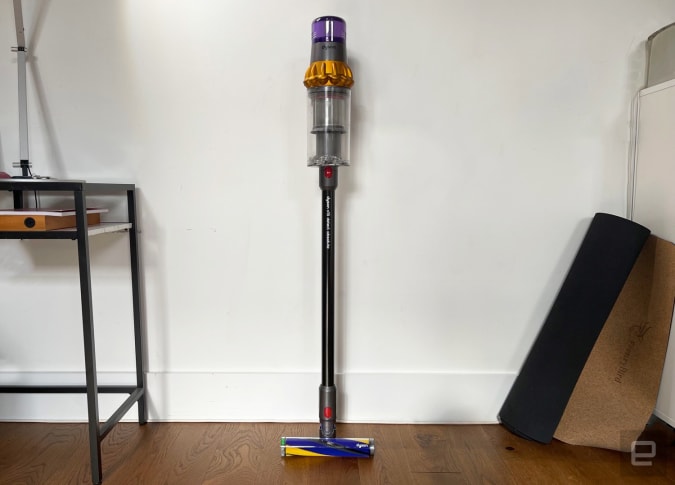 It feels weird to consider a high-end vacuum as a luxury, or even a treat. But honestly, that’s how it felt when I was using it: reliable, powerful, and habit-forming. The V15 Detect is the same price as the V11, but it does more to demonstrate to the user that your floors are being cleaned, ruthlessly. It’s also not the company’s most expensive stick vacuum, with that honor going to the $800 V11 Outsize, which has a bigger dust compartment and cleaning head.

I’m explaining away the V15’s asking price, but this remains a high-end vacuum for people willing to stump up for it. I own a PlayStation 5, an overpriced manual espresso machine, an Instant Pot, even an iPhone 12 Pro Max. It’s that kind of product, and it’s hard to argue against how well this cleans my carpets and rugs, too. My floors have probably never been cleaner, and the lasers prove it.

Bias isn’t the only problem with credit scores—and no, AI can’t help

When will Windows 11 ship? Here’s what we know

5 Things We Learned from the Elden Ring Trailer

AMD notebook silicon roadmap between 2020 and 2022 leaks with details on Rembrandt, Barcelo and Dragon Crest series

The great exit: central banks line up to dial back emergency stimulus

A person walks past the Bank of England in the City of London financial district, in London, Britain, June 11,...

A Didi logo is seen at the headquarters of Didi Chuxing in Beijing, China November 20, 2020. REUTERS/Florence Lo/File PhotoHONG...

Kelly Bania, analyst at BMO Capital, reiterates coverage on Walmart (WMT) in the Consumer Goods sector with a Buy rating....

Ariel Rosa, analyst at Merrill Lynch, reiterates coverage on XPO Logistics (XPO) in the Industrial Goods sector with a Buy...